We had not one, but two sit down interviews, in which we get to know producer and musician Zoocci Coke Dope, whose real name is Andile Sibabalwe Fiphaza, a little bit better.

On this episode of The Weekend Turn Up, TV and radio personality, Scoop Makhathini sits down with one of the biggest names in the industry at the moment, Zoocci Coke Dope. He has worked with many well-known and established, as well as new upcoming rappers in South Africa. Scoop Makhathini finds out about Zoocci Coke Dope’s experience in the music industry, what’s influenced his own sound and about the different collaborations he’s already done and still wants to do in the future.

Zoocci’s passion for production led him to study sound engineering but he dropped out after a year. While studying, he found himself doing more school work than actually making music, which he believed held him back. Watch two of his interviews with us, the first one where he talks about his album Anxiety alongside MacG, and the second one where he talks about his upcoming album release Anxiety+ with Scoop Makhathini.

Who are some of the most influential artists to your personal sound?

Kanye West is the greatest artist to ever be. Peaches and Cream is something that I’ve really been enjoying lately. Generally with older music, it feels as if people used to care more about the songs they were producing. These aspects have a lot of influence on my style and how I approach my music. It offers insight into a lot of very experimental sides of producing.

How did the Riky feature happen?

There were a lot of politics involved, as can happen sometimes with these kinds of things. We saw each other at the South African Hip Hop awards and we spoke directly about these issues. When lockdown came, he gave me a call just to check if everything was still going well and to say that he was ready to pick up work again. The rest is history. 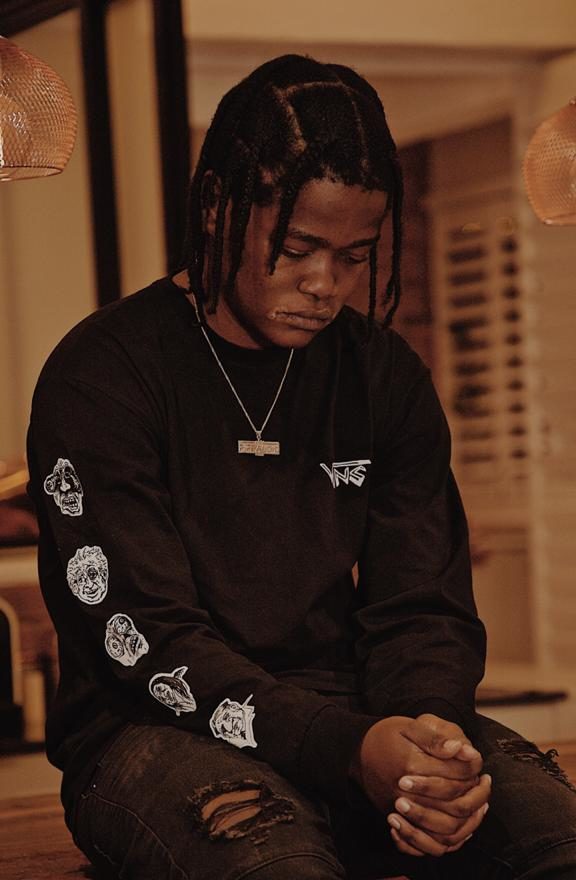 How are things between yourself and Flame?

I pick up the energy that people give off. I noticed at some point that he wasn’t in a good space. He was around me, and I’m not a big fan of when you have something on your mind or in your life, you’d rather lash out. And you need to see it through your behaviour that something is going on. It’s important for me to properly address issues, so that they can be resolved through understanding. People shouldn’t have to pay for your personal issues. Thankfully, the lockdown gave him the opportunity to resolve these issues and we’re back together on good terms.

How did the Liquideep collaboration happen?

About a year ago, he messaged me saying, he thought I sounded like an artist who really cared about the sounds I was producing. He wanted to get involved in any way that he could. I listened to some of the tracks and could just feel Liquid fitting perfectly.

How many tracks will there be on the new album?

On Anxiety originally, it’s going to be 13 songs. On the Deluxe, there will be 18 songs in total.

What happens for you when you work with so many different artists?

25K’s DJ was playing the Culture Vulture song – it was so fresh, I couldn’t believe what I was hearing. I could only think, “Who the hell is this?” I got into contact with them the next day and I just had so many ideas for the sound that they had. He came to my place and we recorded a song that same day. When I heard it, I knew I was onto something.

How did it feel when you got into the game and you said: “Really, I’ve been over prepared and unimpressed”?

It upset a lot of people. But to be honest, the people who get upset about these types of things don’t exist in my world. I really don’t feel as if I need to take back anything that I’ve said. I’m someone who takes time to think about what I say. What I say is what I mean. It’s as plain and simple as that.

Our weekly Weekend Turn Up feature provides new and established South African artists with a platform to tell their stories and share their experiences.