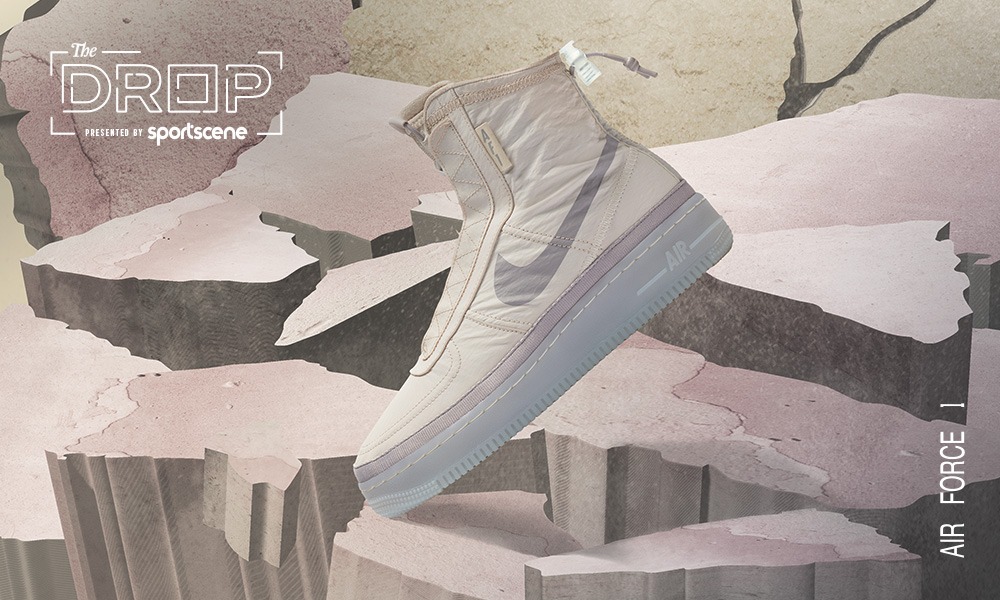 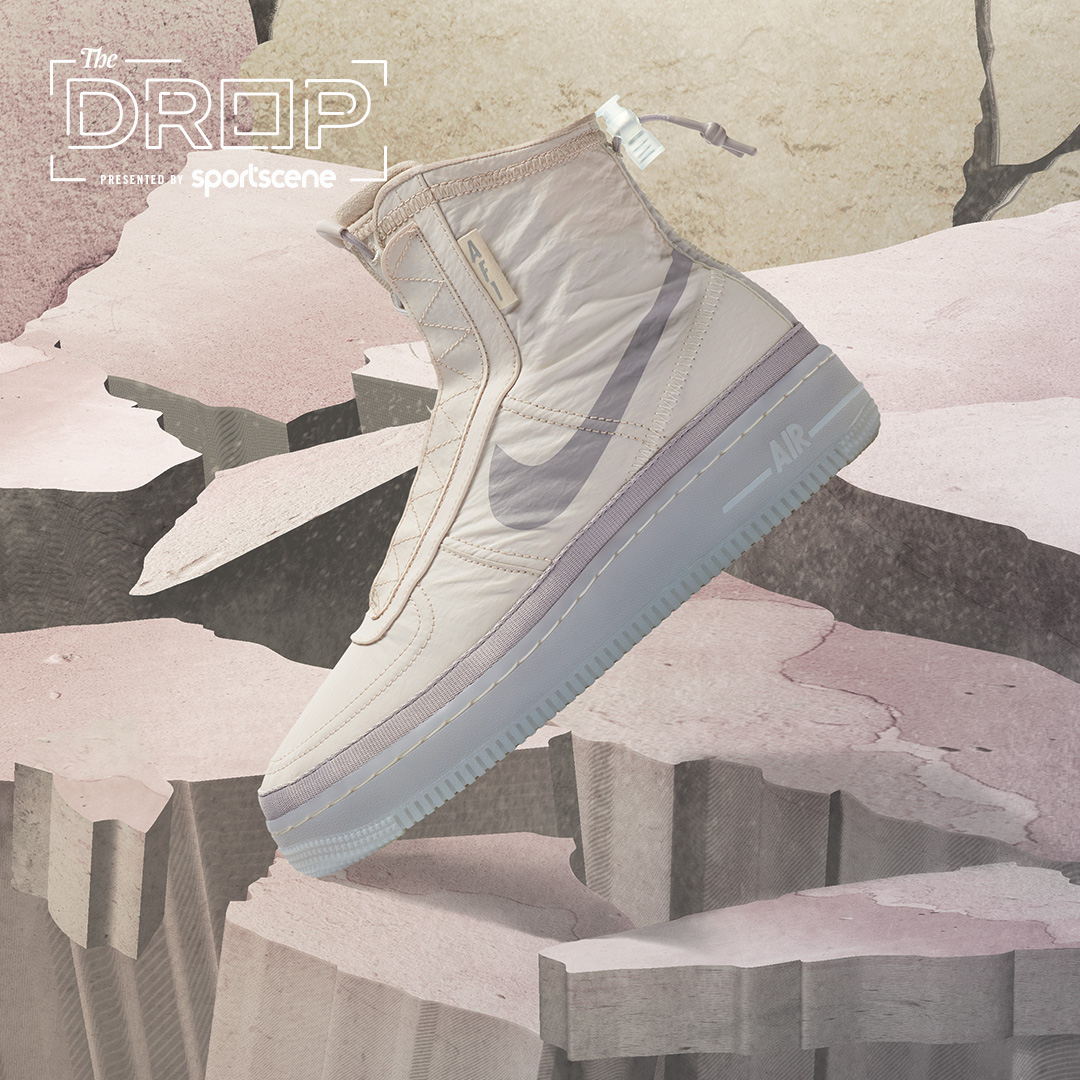 A JACKET FOR YOUR FOOT.

Designed in 1982, the Nike Air Force 1 has permeated culture for decades and continues to be a fashion staple thanks to clean lines, strong midsoles and classic colourways.

Inspired by seasonal outerwear, the Nike Air Force 1 Shell has a water-repellent upper and an adjustable collar to help keep you dry when the weather turns.

A textile upper with a water-repellent finish covers the foot from the elements and the soft Sherpa fabric sockliner provides warmth.

A loop that cinches the laces at the top is functional and gives a nod to similar toggles traditionally used in winter outerwear.

A sprayed Swoosh design, cord detailing on the upper and back tab create a premium look. 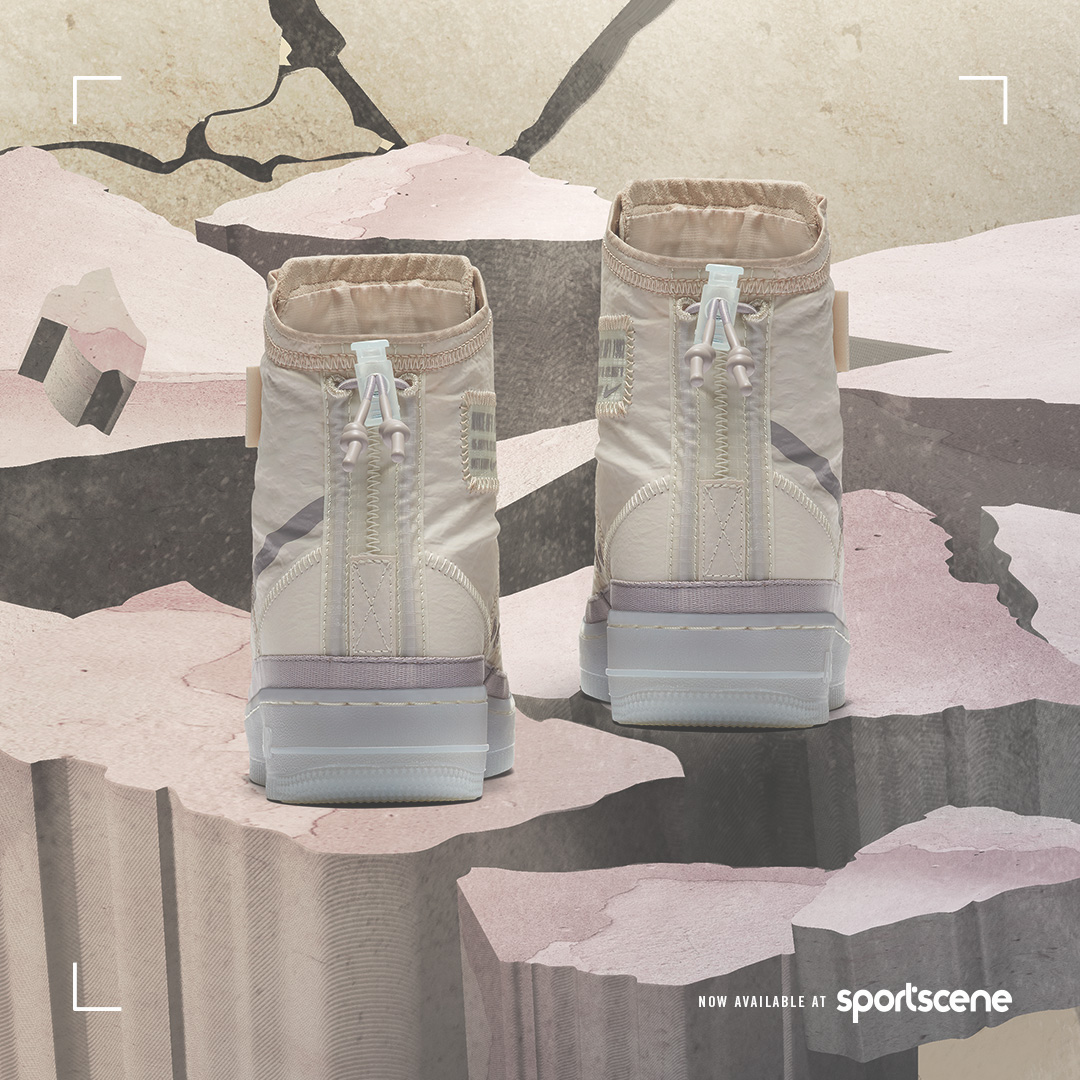 Air Force 1 Shadow: a Legend of 1 Became a Legacy for All

A FORCE made for the game, made fresh by the streets.
A FORCE is not only one that is perceived by others to be great, but one that is grounded in her purpose and path.
From the great 1s to the real 1s and the next 1s, this is for you.
You are 1 of us.
We are ALL FOR 1.

With a slightly higher mid-sole providing a modern lift and core-outed outsole that makes the shoe lighter and more comfortable, the Air Force 1 Shadow is audaciously pushing the elements of excellence to the forefront. Characterized by double design details and layered pieces, the Shadow’s inspiration comes from women who are thought leaders in their communities and are setting examples as forces of change.

The Cosmos births an heir

The flawless result of 7 years of development and experimentation presents an unquestionable force amongst its peers, a sneaker in a league of legends. Nike Air’s best-kept secret acts both as a sports shoe and a flawless complement to nature itself. Composing of a bigger heel clip and a midfoot lockdown system, stability becomes no question in the most flexible Air unit yet.

The blend of art and style

HERITAGE
Remember the revolution. 1987 saw the birth of the Air Max lineage, showcasing visible Air for the first time. What began as an experiment in cushioning soon evolved into an icon on the track and the streets. Over the years, it’s been reimagined and retooled, but the heritage always remains.

Less is more is less

Top to toe in a single hue? Its execution is easier than you think. Variations of a single colour breathe cohesiveness and intellect into a look, which would otherwise be a Crayola playground. This is no easy concept, but a style that can be mastered swiftly.

Nothing says you’re keeping it all together quite like monochrome. From sports lush to nightlife shining, keeping it simple raises the bar to heights unknown and is supremely decadent.

The basic tee just got even better

Boasting a luxe take on the everyday Tee, the minimalist Women’s Short Sleeve Top becomes the firm foundation of any look. Give this item any supporting acts and they will feel right at home. A cheeky crop design invites your youth to play, while its demure style impeccably elevates one to their refined nature.

The soft jersey fabric delicately hugs the skin while the Nike graphics shake things up with neces- sary flavour. Classic, understated t-shirts that surpass the test of time are difficult to come by, and this offering is one that is a sure promise.

This is the last jacket you’ll ever need to own

Exceptional cool meets ultra sophistication for the sports woman who wants to take it up a notch. Considered stylish touches in its satin finish, fused with the trendy graphics of the Nike Air tape, make for a modern girls answer to perfect jacket.

A summer jacket that simply completes any look is what this is. With the different colour options to play with, it features a high collar that shoots one straight up to “you’ve arrived” status, while simultaneously keeping its metaphoric feet planted firmly on mother earth. Nothing says cool, calm and collected quite like it.

If you haven’t already, jumpstart your life with the wardrobe’s best kept secret

Previously considered a pilots uniform that became the breakout star of the 70s, the super-duper-fly onesie is back in full force and becomes the wardrobe essential you never knew you needed. A classic trend embodying Air’s lightweight identity is now known for its refined versatility and audacious characteristics. As futurism becomes an increasingly present conversation, Nike presents the future of jumpsuits, now.

The style of this monochromatic offering, accompanied by geometric lines and clinical shapes, unifies otherworldly concepts with modern day design, embodying the innovative culture of Nike. A multifaceted item of clothing has never been more dynamic, now with the added thrills of daring exploration. 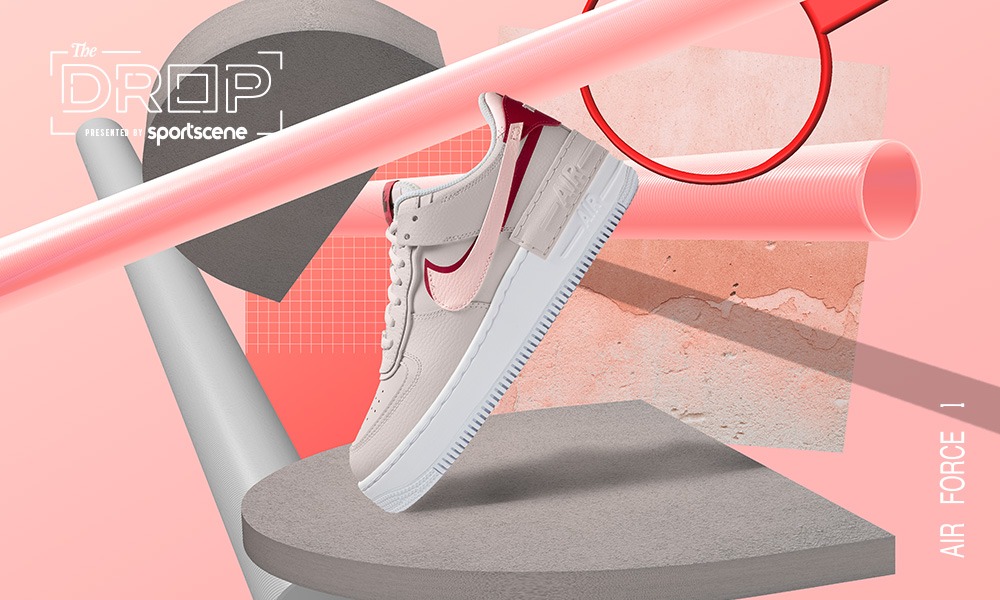 The Nike Air Force 1 Shadow puts a fun, playful twist on a classic design. Using a layered approach, double the branding and an exaggerated midsole, it highlights AF-1 DNA.

With 2 eyestays, 2 mudguards, 2 back tabs and 2 Swoosh designs, you get a layered look with double the branding.

A foam midsole and a grooved outsole ensure that the shoe is lightweight, flexible and comfortable.

The Nike Air Force 1 was the first basketball shoe Bruce Kilgore designed (the same man behind the Nike Air Pressure, the Air Jordan II as well as tennis court shoes like the Avenger and the Air Ace). The first of Nike’s basketball shoes to utilise the brand’s revolutionary Air tech (which features a pocket of air in the sole to allow for cushioning), it is available as a low, mid and high-top.

First released in 1982, Air Force 1 was just the beginning. It would spawn a lineage that includes the Air Force 2, 3, STS, 5 and XXV. The last celebrates the Air Force 1’s 25thanniversary in 2007. 10 years later, for the shoe’s 35th birthday, Nike collaborated with hip hop legends Don C, Kareem Burke and Travis Scott as well as designers Errolson Hugh and Virgil Abloh to create special editions of the shoe that both celebrated its links to hip hop as well while playing with the shoe’s original white-on-white look.

While white-on-white is the most common and certainly the shoe’s most iconic look (second most p-black), the versatile kicks have seen an array of colorways and styles released. Shop our full collection here. 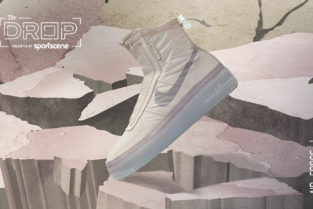 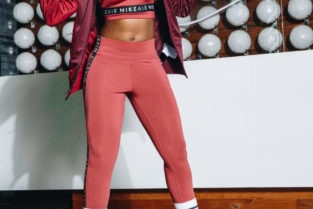 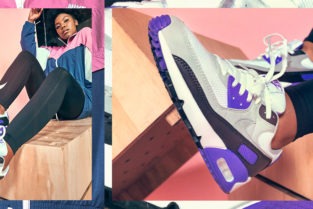